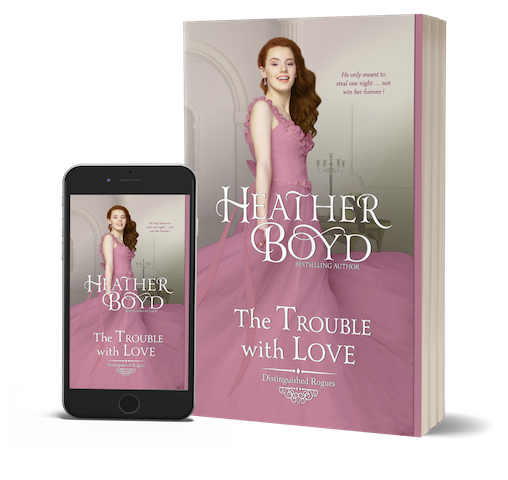 Keeping a promise has never been harder!

Whitney Crewe has a dream for her life, and it does not include a properly boring marriage or remaining in England. Passionate by nature, she’s headed for an adventure abroad but has been temporarily lured into the countryside to paint an important family portrait. Unfortunately, a friend is set to marry the family’s nearest neighbor, Lord Acton, and he is someone Whitney has seen far too much of…with and without his breeches on. Their past must remain a mere memory, but ignoring him proves impossible when she understands the decisions he’s made to protect those he loves.

Lord Acton is keeping secrets from his friends, and particularly from his innocent bride-to-be. The first was losing his head over an intoxicating, veiled seductress one gloriously reckless evening. A man of his word, he has no choice but to keep his promise to wed, even after he discovers his seductress was his bride’s friend, eccentric heiress and artist, Whitney Crewe. The second secret, Whitney stumbles upon all on her own, but her anger swiftly becomes an offer of friendship and much-needed compassion. They have absolutely nothing in common, so why oh why would he risk his future getting to know Whitney when she’s opposed to everything he desires?

The Trouble with Love is a humorous and hot regency romance.

Praise for The Trouble with Love…

The Trouble With Love blends fanciful with emotional and begets exceptional. If nothing else, Whitney and Acton prove that life has a sense of humor and sometimes the heart is the last to know, what the head has already discovered. ~ Isha Coleman, I LOVE ROMANCE 5 Stars

Ms. Boyd has created two characters that cause the rest of their world to fade with their vibrancy and willingness to be passionate about life. ~ Dianne, TOME TENDER 4.5 Stars

…it’s the slow building type of romance with a sexual chemistry just waiting to boil over. The Trouble with Love is a great addition to this series and sees one more distinguished rogue find his own HEA. ~ JG Baldos, DELUGUED WITH BOOKS CAFÉ 4 Stars

…the perfect amount of drama, romance, and steamy moments that make this a book to be devoured. ~ REVIEWS BY CRYSTAL 5 Stars

“I’m sorry, but I told you—and Martin—many times that I do not need or want a companion following me about anymore.”

“It is expected, Whitney. You’re not married yet. You must think of your reputation.”

“And look as young as anyone fresh on the marriage mart.” Miranda sighed deeply. “But it is done now, and I trust you compensated the poor woman for the trouble of being dismissed after a mere two full days’ employment.”

“I did indeed. She has a glowing reference and fifty pounds, and that should ensure Mrs. Fry never has to work for an obstinate, headstrong spinster like me for a while,” she said soothingly, experiencing a twinge of guilt that she made the marchioness worry over her. Miranda wasn’t always in good health, so Whitney led the marchioness up the long flight of stairs by taking her elbow. It was Miranda’s heart, of course, the organ most likely to give a lady trouble. Tonight, the marchioness did seem to lean on her arm, so Whitney held her up a little more firmly. “How are things with you?”

“Very well. The dowager moved out to the dower house as if the devil chased her upon my arrival. She expects our son to visit her daily but other than that, we are quite civil. Of course, she dotes on Christopher, so she tolerates me for his sake.”

Whitney winced. Miranda and her husband hadn’t had the best start to married life, and the dowager, the most fearsome woman she’d ever encountered, was said to have favored another woman for many years. It had been a messy situation all round. Love did that. “Perhaps I’ll ask Christopher to escort me to the dower house when I go to pay my respects tomorrow morning.” Only for the sake of peace for Miranda, of course. “I suppose everyone else has gone off to bed by now.”

“Heavens no. The dowager is here, and the entire household remains awake and waiting on your arrival. Lord Acton and his guests have joined us, too.”

“What is Acton doing here?” Whitney groaned. “Last I heard, he was in London.”

Not that Whitney was keeping track of the scoundrel.