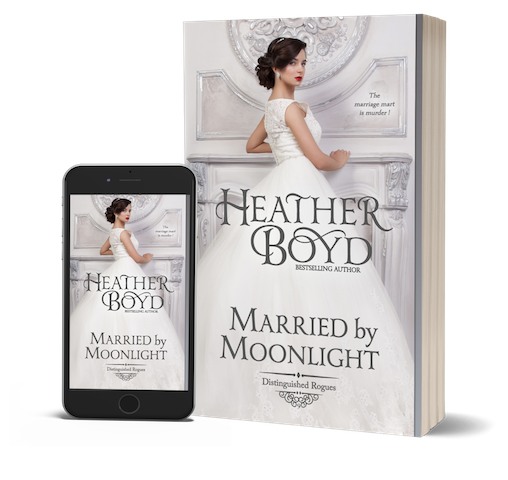 The marriage mart is murder!

Nearly twenty, Anna Beasley despairs of ever finding a husband. Eligible bachelors seem to avoid the stuttering, blushing debutante in favor of her bolder, more adventurous friends. Much to the delight of her father, who’s determined to marry her off to his godson, Lord Carmichael, despite Anna’s refusal. Her lifelong nemesis, Carmichael has kissed half the young women in London.

Surely Carmichael’s friend, Lord Sorenson, newly arrived in Town, is cut from the same cloth. Anna decides to stay away from him…despite his wicked smile that makes her quiver.

Gilbert Bowen, Earl of Sorenson, had planned to live out his days as a country vicar. But when his old friend Carmichael sends a desperate plea for help, he can’t say no. There’s a murderer among the ton—and every death leads back to Carmichael. Catching a killer during the social season is difficult enough…and then Anna catches his eye. The shy beauty is a distraction he can ill afford but scarcely resist.

When the pair are caught in a compromising position, Sorenson needs little convincing to claim her, especially if it keeps Anna out of harm’s way. But with as many twists and turns as there are suspects, this case may find no one safe—especially when the killer is closer to home than they ever dreamed.

Married by Moonlight is the 10th steamy regency historical romance novel in Distinguished Rogues series but can be read as a stand-alone.

Praise for Married by Moonlight…

★ ★ ★ ★   “The mystery … had some great twists and turns to it. For the most of the book I had one person in mind as the killer and I ended up being totally wrong.” ~ Melanie V