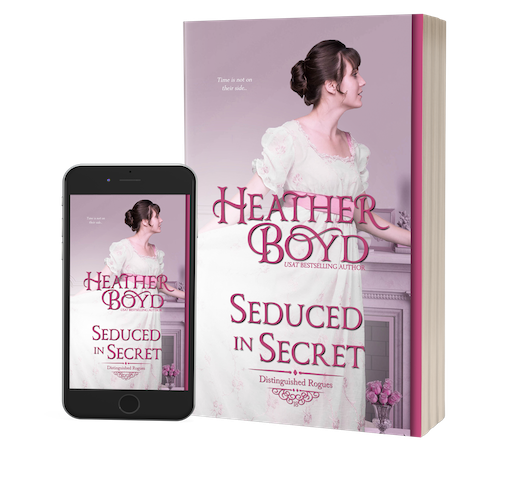 The banns have been called, the date is set, but he’s falling fast and hard for the wrong woman.

When her parents announce they intend to break their promise to remain in London society for another year, Charlotte Waters is also given an ultimatum—make a suitable match immediately or start packing her trunks. Since leaving England is the last thing she wants, Charlotte puts aside her foolish longing for love and throws herself into the hunt for any proposal of marriage with the help of her good friends. However, her persistent infatuation for an engaged earl proves a great distraction when it becomes clear that his life is in peril…and Charlotte is the only one who’s noticed.

Winston Bell, Earl of Hurlston, has his position in society, a loving mother, loyal friends, and an arranged marriage he’s willing honor for duty, if not love—until a sweet, brave, and normally blushing wallflower puts herself in danger to save his life. His gratitude slowly blossoms into an attraction to a woman he shouldn’t long to seek out at every turn. But when another attempt is made on his life, Charlotte Waters is fighting right by his side again, transforming attraction to deep desire. Can he prevent falling further under the spell of a woman he shouldn’t want?

Seduced in Secret is a full-length regency historical romance. It’s the eighteenth book in the steamy Distinguished Rogues series but can be read as a stand-alone.

Add to your Goodreads Want to Read Shelf

Add to your Bookbub Wishlist

Distinguished Rogues Series
1. Chills – Jack and Constance
2. Broken – Giles and Lillian
3. Charity – Oscar and Agatha
4. An Accidental Affair – Merrick and Arabella
5. Keepsake – Kit and Miranda
6. An Improper Proposal – Martin and Iris
7. Reason to Wed – Richard and Esme
8. The Trouble with Love – Everett and Whitney
9. Married by Moonlight – Gilbert and Anna
10. Lord of Sin – Julian and Portia
11. The Duke’s Heart – Sinclair and Kitty
12. Romancing the Earl – Price and Lenore
13. One Enchanted Christmas – Otis and Margaret
14. Desire by Design – Alexander and Sylvia
15. His Perfect Bride – Harry and Ophelia
16. Pleasures of the Night – Teddy and Eugenia
17. Silver Bells – Hector and Ruby

“I am not engaged to dance tonight.” She peeked past the earl’s wide shoulders, hoping to see an available man heading her way. Unfortunately, none were forthcoming, and a set was being called. She glanced at the earl, willing him away for the first time in her life.

“That is…” His gaze was sympathetic, though he seemed to take a long time to search for the right words to continue. Gentlemen did not line up to dance with her. They had to be persuaded to it by someone who liked her.

“It’s perfectly fine,” she assured him.

“I was going to say disappointing to hear.”

“Think nothing of it, my lord. I’ve become an expert observer at tonnish amusements.”

“That should never be the case for a lady as pretty as you.” He gulped as soon as the words were out of his mouth and looked away.

She fought not to smile at the unexpected compliment. Lord Hurlston had just called her pretty, and that made her feel a little better. He hadn’t meant to compliment her, she was sure, which accounted for the blush forming on his cheeks now.

Lord Sullivan convinced Aurora to dance with him, and she winced as her friend was led away. With Aurora gone, Charlotte would have to find Eugenia to play chaperone for as long as the dance lasted.

“Miss Waters,” Hurlston said very quietly. “If you have no objection, I wonder if you would like to dance this set with me?”

She laughed softly, but she was blushing, too. “Did Mr. Berringer put you up to asking me to dance again?”