Huzzah! A Gentleman’s Vow is now available to readers in Australia! Readers in other countries should have their copies soon. If you didn’t pre-order your copy, I hope you’ll check it out today. 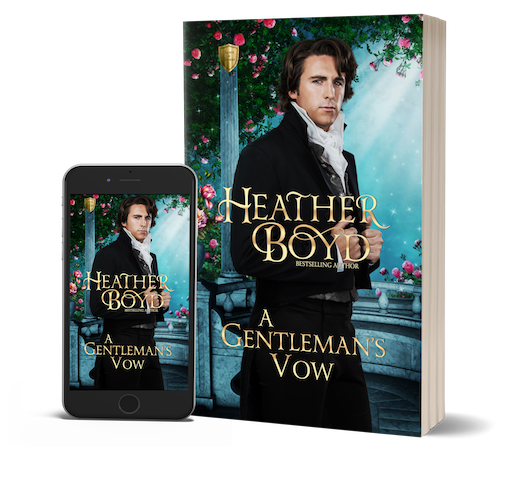 Jaded by the experience of dodging fortune hunters during her first season, Lady Jessica Westfall returns home to the estate she loves expecting peace…until the biggest fortune hunter of all follows her from London. To keep Lord James at bay, Jessica enlists the aid of her neighbor, Gideon. As her lifelong friend, Giddy can be trusted to help thwart James’ pursuit, while also satisfying Jessica’s budding interest in things of an intimate nature…things like the kisses she’d missed out on during her season.

Gideon Whitfield’s quiet bachelorhood is interrupted by the arrival of a marriage-minded widow to the nearby village, with her sights set on him as her savior. But the greater threat to his peace proves to be his dear friend’s daughter, Lady Jessica Westfall. Gideon has always adored Jessica, and had expected the headstrong beauty to marry well in her first season. When she comes to him for help avoiding the unwanted advances of a fortune hunter, and also lessons in love—he may prove utterly incapable of helping her while guarding his own heart in the process.

The French doors to Gideon’s drawing room were open to allow the breeze to enter. Believing him to be home, she decided to speak to him before continuing on her walk.

A flash of blue across the grounds caught her eye and, expecting Giddy, she turned, lifting her hand to wave. She froze instead.

A woman wearing blue, a stranger with dark hair and pale skin, was strolling beneath the trees at Gideon’s side.

Jessica darted inside the nearest walled garden before she was seen where she ought not to be without a chaperone.

Hearing no footsteps or anyone calling out to her, she risked a peek around the open archway. She was in luck; Gideon and his visitor appeared not to have noticed her at all. They were still some distance away and not looking in her direction. Unfortunately, there was only one way out of this particular walled garden, and while Gideon would not scold her, Jessica had no choice but to remain where she was until the stranger went away.

Jessica inhaled her scented flowers as Gideon and the woman continued to talk. What they said, she couldn’t hear, but Gideon laughed suddenly.

He held out his hand, and the lady shook it.

And then the woman laid her hands on Gideon’s waistcoat and stretched up on her toes to kiss him full on the lips.

Jessica covered her mouth with both hands to hold in the gasp of shock that would reveal her presence to Gideon and the woman.

She had not believed Natalia’s tale held any truth yesterday. But here it was. Right before her.

Gideon Whitfield was courting someone at last!