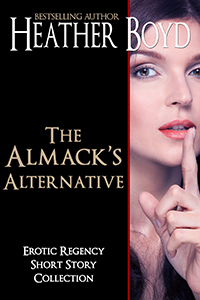 Five short stories in one volume.

I. ABANDON
Desperate spinster, Victoria Graves, is willing to do anything to escape her wallflower status. But is attempting the resurrection of a dead man, Alexander West, on the whim of a cloaked stranger, within her abilities?

II. CRAVING
(MMF Ménage)
Impoverished lord, Simon Tate, needs a solution to his financial woes and he thought tonight’s meeting would provide him with the answer. Turning to his happily married friend, Neil Hunter and his new wife Annabel, as his envelope suggests, goes against the grain until they make an offer too good to refuse.

III. FALLING
The ton likes Victor North for his wealth, but not necessarily for their daughters to wed. When the mysterious lady at the Almack’s Alternative meeting suggests he court Lady Regina, he’s certain it’s a cruel joke because the lady is reputed to be as far from England as it was possible to be.

IV. IRRESISTIBLE
(MMF Ménage)
Adam Clarke needs two things in his life: a wife to make his family happy and provide him with an heir, and Ethan Rudhall in his bed whenever they can meet. When Adam and Ethan meet stumbling wallflower, Lady Millicent, they discover what lies beneath her blushes and clumsiness might be everything they need.

V. RENDITION
The mastermind behind the Almack’s Alternative meetings, Lady Mary, enjoys matchmaking for those who’ve fallen from society’s good graces. An outcast herself, she’s content to live in the shadows bringing happiness to others until fate brings Andrew Drake, brother to the man who caused her downfall, sneaking through her door.