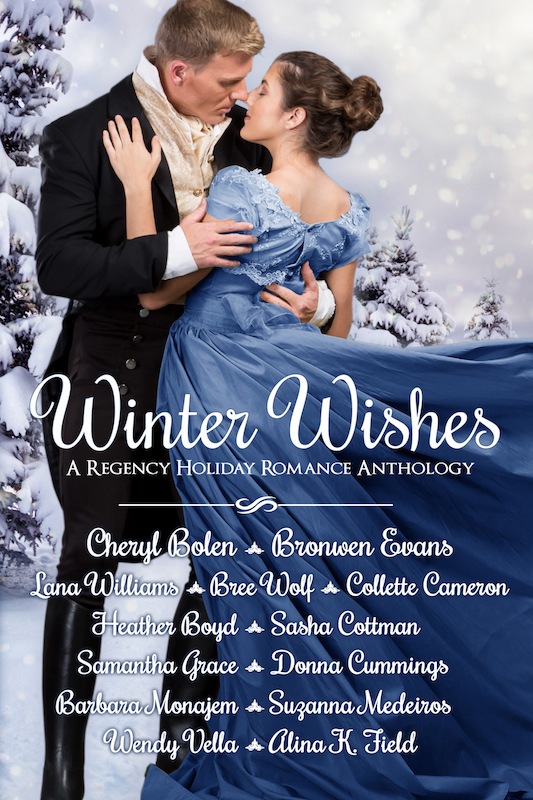 After a very long year of plotting and planning, WINTER WISHES: a Regency Holiday Romance Anthology is live in stores today.

Nearly 370,000 words. Over 30 hours reading time (according to Kobo). Thirteen brand new romances makes this anthology a great escape from real life. There’s something for everyone in this little gem. Thanks to everyone who pre-ordered their copy in advance of the release date. For those who didn’t, just a friendly reminder that the 99c price tag won’t last so grab it quick!

When Lord Clement finds himself in a marriage wager, finding a woman to love in a scant few months seems an impossible task…until he rediscovers his best friend’s sister.

Her brother was to blame for her discomfort, not that he seemed to care.

Until recently, she’d never had reason to venture from the family home on the coast of Dorset. But it was Hector’s home now; her brother had assumed control of their father’s estate and title upon his death, and she was supposed to obey the new viscount—even if she couldn’t seem to stop questioning his decisions.

“It’s not too late to turn back,” Meg told him urgently as Hector’s new traveling chariot began the slow descent into yet another blindingly white valley. “We could be home by Christmas morning.”

“It certainly is too late. We’re almost there,” her brother assured her as he scrubbed the damp from the window with his fist. “You will enjoy yourself.”

Meg doubted that as she huddled more deeply into her coverings. The sun had come out to shine at last and brought with it Hector’s enthusiasm for new surroundings. He had been saying she’d enjoy herself repeatedly for the last day, and she was still quite sure he was wrong. Spending the anniversary of the worst month of her life in Derbyshire, at the home of a terrible rogue, was not her idea of fun.

“We should still celebrate Christmas the way we always have,” Meg insisted, determined to win her brother over. “In our home. I had everything in hand before you arrived.”

“Next year you can do as you wish,” he promised. “But this year I have other plans than sitting in Dorset all alone.”

Meg shivered, wishing her brother had stayed in London. His return had heralded an upset of all her plans for the holidays. And now she was here, far from home and all she’d ever known. Meg had heard nothing good about her brother’s closest friend in the past few years and now she would be forced into close proximity with him for weeks.

She had known Lord Clement as a boy, but it had been a decade since she’d lain eyes on him. She had heard enough to form a clear picture of his character though. Lord Clement was often gallivanting about London with her brother, too important to visit their little coastal village. Meg believed him to be a terrible influence on her older brother.

She heaved a heavy sigh. There was only one thing to look forward to this holiday. Lady Vyne, the rogue’s mother, was certain to be better company. Lady Vyne had written Meg many comforting letters in recent years following the death of her mother and then her father so soon after.

Hector suddenly began gathering his possessions—book, handkerchief, and a pouch of sweet meats he’d procured along the way—and stuffed them into a leather satchel he’d kept at his side for the entire trip.

Meg hugged her book close to her chest. “Mother and Father are still with us in spirit,” she argued.

Hector shifted forward to stare at her, his expression grave. “If Mother and Father are spirits as you continue to claim, and watching over us as well, then surely they’ve heard our itinerary many times from your own lips and will have hitched a ride.”

Meg wished that might be so. Did ghosts ever take a holiday? “That is how they met. Father climbed into the wrong carriage, and they fell in love.”

“By the time they reached the fourth turnpike,” Hector said softly.

“Love at first sight.” Meg wanted so much to believe in the impossible right now. Even though she had Hector still, she felt very alone without her parents. There was no one to tell her secrets to and no one who gave her theirs to keep. Two years of death, first her mother and then her father, and the constant period of mourning had been hard to bear for everyone. Her closest friends had married and moved away to start new lives with their husbands already. She had lost touch with all but a few.

Hector had been away in London when their father had died, but he had rushed home to be with her for the burial. He had not stayed long, traveling back to London to meet with Lord Clement while she had mourned alone.

And now Hector insisted she must travel with him. In the winter!

“Cheer up, old thing,” Hector said. “Who knows what might happen during the holidays.”

Nothing good, she suspected. Not if Lord Clement was anywhere in the vicinity of her brother. She might not see much of Hector either. That was not how she wanted to see out the year.

Meg huddled farther beneath the warm furs, trying to resign herself to the fate her brother had forced upon her. “I’m still in mourning,” she reminded him. “Even if you forbid me to be.”

He shoved his satchel aside roughly. “It was past time!”

Meg glared at him. “Papa deserved to be mourned for a full year as we did with Mother. Six months is hardly long enough.”

“Enough is enough,” he cried, smacking his fist on his thigh. “You will do as I say, and be grateful I care enough to take you to visit my friends at all. I am the head of our family and you will enjoy yourself.” Her brother scowled. “I insist you make merry.”

Meg glared at him. “You cannot make me pretend.”

Hector pinched the bridge of his nose, a sure sign she was trying his patience. “You will not embarrass me by spoiling Christmas for Lord Clement and me.”

Meg pressed her lips together tightly, affronted that Hector thought more of Lord Clement’s happiness than hers. “You don’t seem to care what I want anymore,” she grumbled even though knowing she was being difficult. This trip had been a tax on her nerves. She’d barely slept last night in yet another strange bed.

She slumped in her seat as her eyes pricked with the threat of tears. There were days she did not like her brother. He gambled away his fortune and spent far too many nights out in society. His improved situation had gone to his head. She’d also heard gossip he had a woman in London too—the sort Mama had whispered must never be acknowledged.

“I do care. Very much, and it is high time I did right by you and brought you out in society.” Hector nodded. “Gentleman have to see you in order to ask to marry you.”

Meg blushed at the idea of marrying a stranger. Hector was all for that. “You speak such nonsense. No one will notice me here.”

“On the contrary, Lady Vyne is sure to host at least one dinner during our stay. There’s a village not far from the manor house, too, and we will be here until after Twelfth Night don’t forget. Anything can happen in that amount of time.”

Meg turned up her nose. “That village has an alehouse, I assume?”

Hector grinned widely. “Every village tends to have at least one. Gentlemen come for miles around and some of them call on Lady Vyne, and Clement, too. They will assist with any introductions if they deem the connection suitable.”

He had an answer for everything. “As if Lord Clement would stir himself on my behalf.”

“I thought I was that to you once,” Meg grumbled.

“You’re worse. You’re my unmarried little sister. It is required that I adore you,” Hector teased, grinning as he tapped her nose. “Even when you are out of sorts. If the signs of merriment bother you so much, just try not to scowl at everyone for the duration of our stay. Don’t spoil Christmas for the rest of us. Mother and Father would hate to know you were so miserable.”

She heaved a heavy sigh. Hector was probably right, but Mother and Father had made this time of year special. She had hoped to do the same but for Hector instead. “I will do my best. To honor their memory.”

Hector turned his attention back to the view. “Excellent.”

Meg glanced out the foggy windowpane, too. It wasn’t Hector’s way to let grief smother his good spirits. He had lived away from home for a long time. He’d not borne the worry of caring for either of their parents as they had declined.

He meant this trip as a way to end their mourning.

Meg might never end hers, no matter what happened. Her life had not been the same since her mother and then her father had passed, and it could never improve.

Frustrated that her breath had fogged the window again, she rubbed a circle on the pane with her fist and glared at the rolling fields of white powder until she realized she was looking down at their destination.

The manor on The Vynes estate, a widespread yellow stone structure, sat at the end of a long, winding road. Snowy mounds hiding what might be garden shrubbery dotted the landscape, bordered by low stone walls around the dwelling. But everything that could be pretty or green was hidden beneath inches of snow. There was no warmth here.

Meg desperately missed the rolling blue of the sea and the sound of crashing waves upon the shore near her home. It had been three days since she’d been bundled into this carriage, and two uncomfortable nights sleeping at posting houses along the way.

She focused her gaze back on the nearing house with a sense of foreboding. The family they were visiting were a good bit wealthier than they were, and it was a larger family, too. Lord Clement had a mother and father, Lord and Lady Vyne, a younger pair of unmarried sisters, and an infant brother as well. It was going to be a noisy few weeks in the country, and awkward to be with another family.

But Hector grinned as the carriage began to travel around the circular drive that would bring them to a stop before an impressive pair of oak doors. “Ready to dash inside and begin to make merry?”

“If my legs haven’t gone numb yet.” She smiled with false brightness. “As ready as I’ll ever be.”

But there was little chance this was going to be a happy Christmas. Meg was sure it might just be the worst ever.