I’m so glad to see the back of March and hopefully an end to this crazy hot Summer. Heat and humidity are not really my friend. However, thanks to getting an Air Conditioning unit for my office, I’ve managed to write a fair few words since New Year’s Day. I’m really pleased to promise I’ve got a number of new stories in the pipeline for release in the latter part of the year, including a super secret one. More on that one later.

First book announcement is awesome. I just finished writing the Hunt Club’s sixth story last week! I’m both elated and sad about finishing up that series, but I do know from the number of fan emails that so many are waiting for this one last important story. No spoilers today, but I have booked the edit for Once a Husband for June. Depending on the feedback I get from my fearless editor, I expect to announce the release date here in July. Keep an eye on the coming soon page as well.

Coming up in May is the 6th Anniversary of publishing Chills, book 1 of the popular Distinguished Rogues series. To mark the special occasion I’m sprucing up the whole series — new covers and formatting for every book (including print) and an update on the first three early stories to bring them up to date with my current writing style. I’ll be showing off the new look books May 1st and updating all the booksellers during the following week(s). If you’ve read some of the books in Kindle format and do not have automatic updates turned on you might want to do that this month so you get them as soon as they become available.

The price of Miss Watson’s First Scandal has dropped to 99c for April and beyond. You can read more about Miss Watson and her friends  (Miss George’s Second Chance, Miss Radley’s Third Dare & Miss Merton’s Last Hope) on the website. 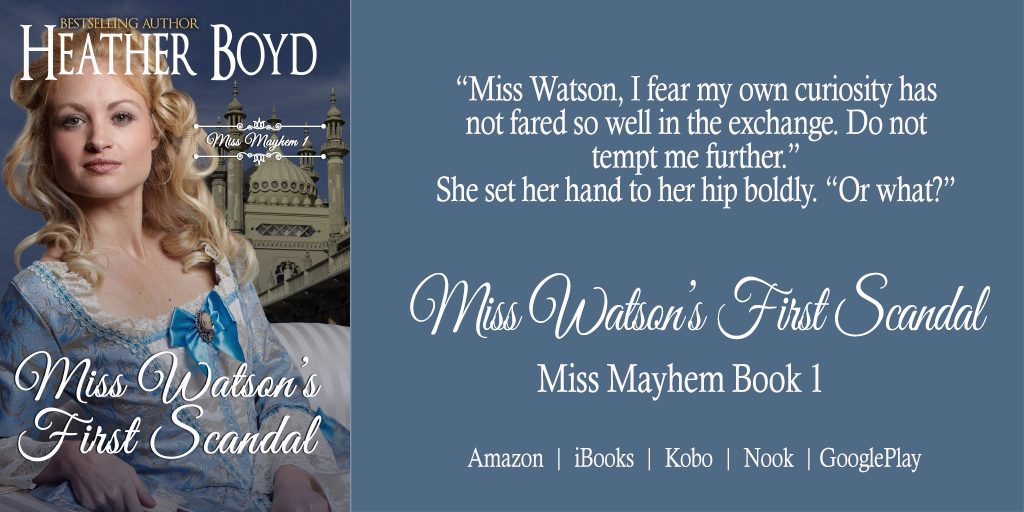 Don’t forget too, new release announcement happen here on the blog and via the newsletter. Be sure to sign up and stay informed.