Reason to Wed is live in online bookstores everywhere!

It’s release day for Reason to Wed, book seven of the Distinguished Rogues series, at last. So far the buzz is good, see excerpts below, and I hope you get a chance to read and enjoy Reason to Wed, my last new release for 2015 soon. Here’s a little taste..

Just let it happen. If all of Esme’s liaisons began this easily, she’d never have reason to be discontent.

Lord Windermere’s breath teased her skin and tempted her to set aside all the reasons why an affair with him wasn’t wise. She did not wish to become another conquest for the earl, but she was still peevish and in need of an outlet for her frustration. Sex had always been her preferred method to rid herself of irritation, and he had offered nicely.

His suggestion too had loosened something reckless inside her that she’d never known existed. A desire to break her own rules grew. To experience something new without forethought or planning had never been her way. But Windermere’s offer did tempt her. She knew him very well. She was aware of his character, his failings and values. Society at large assumed they’d been intimate, but they each knew there had never been any intention of that.

He curled his fingers about her waist in a soft caress that left her wanting more. She closed her eyes as he did it again with more conviction.

A shock of want consumed her. She wanted his hands on her skin, his body entwined with hers, the thrill of fulfilled desire soon to follow. Esme had never considered Windermere as a potential lover. An annoyance, certainly. A man with whom to spar when she felt peevish, as she did now; not that she’d ever admit that as the sole reason she’d enjoyed finding fault with him in the past. Yet tonight she was hard-pressed to find a reason to deny him because she wasn’t satisfied yet. He’d been kind and his timing and understanding of her mood had been excellent. Who would have thought he might interpret her needs so well?

Sharing a bed would change things between them.

She would know his taste, the sound of his pleasure. The most intimate of knowledge only possible when a man and a woman had lain together and driven each other wild.

She turned in his arms. An expectant grin twisted his lips, making him appear boyish and even more attractive. Her pulse raced with anticipation as she saw the gleam of hope in his eyes. “This would mean nothing.”

Praise for Reason to Wed:

“She gets right to the heart of any story and captivates her readers with every tale.” ~ I Love Romance

“A Reason to Read!…A quick escape, this novel is the perfect way to indulge in a happy ending!” ~ Jenerated Reviews

I’m very excited to share news of a giveaway I’m running for two print copies of Reason to Wed through Goodreads. Jump on over and get your name into the draw. Contest closes December 20. 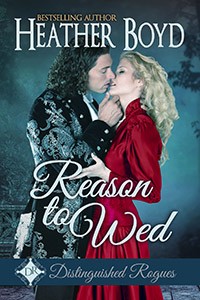 Out Now: Reason to Wed

Richard Hill, the Earl of Windermere, might desperately require a wife and heir, but thoughts of duty fly from his mind when he rescues Esme, Lady Heathcote, from the embarrassment of a failed affair. They usually never agree about anything. He’s never even kissed the vexing widow. But when the opportunity arises to whisk her away for a no-strings-attached rendezvous, Richard can’t imagine a better way to spend a moonlit evening.

Esme has never lacked for admirers, but having Lord Windermere’s company goes a long way to ease the pain of losing her suddenly betrothed lover. And when Windermere suggests an affair, Esme is intrigued by the blazing-hot connection even while knowing their relationship has no future beyond his house party.

But as with any temptation, it’s a bargain they’ll soon regret.

Order in Digital and Print editions: